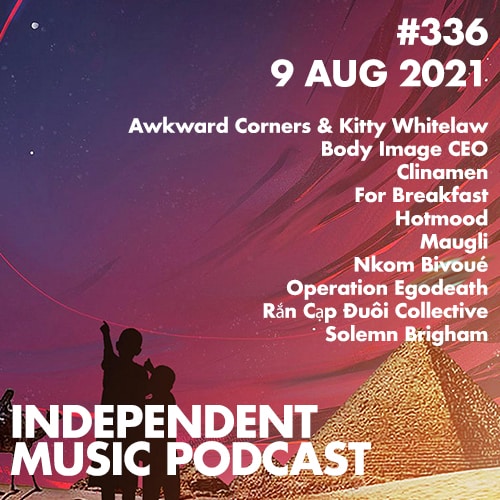 The lovely folk at Independent Music Podcast have featured For Breakfast's re-work of Miles Davis' 'Nardis' on their recent instalment of the podcast alongside some other great aritsts. 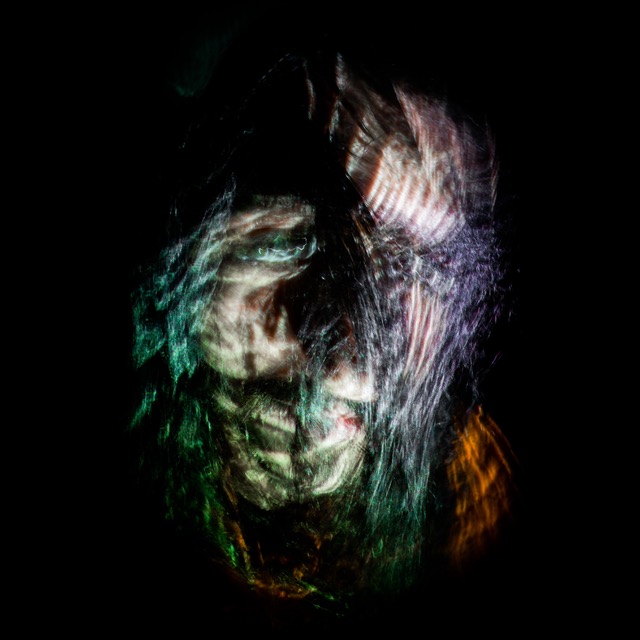 Back in November, Glasshouse's resident miserable jank brigade Burden Limbs filmed and recorded a live session which was broadcasted over a 24 hour period via the Dutch psyche streaming network Supernova Sect a few months later.

The time has now come to announce that 'In The Flesh' is officially released today over on our Bandcamp!

'In The Flesh' is the first follow up to Burden Limbs' 2019 debut EP 'There is No Escape', which see's the band fully-formed and ready to surprise new and returning fans with their jarring and unsettling mammoth wall of noise.

Clocking in just over 28 minutes, 'In The Flesh' is a live recording of four raw and emotionally intense tracks, recorded in one day at Strongroom Studios and for the first time features the band's new second bassist Edmund Dable-Heath and new drummer George Bailey contributing to their sound. This live album debuts two new songs from forthcoming releases as well renditions of the previous EP tracks ‘Hypochondriac’ and ‘Burden Limbs’.

The band’s founder Chad Murray has this to say about the release: “Our focus has become to consistently reach a higher standard with our output and to not only reach new listeners but, also to demonstrate to existing listeners that we are not a band in its infancy but, a band in its prime with a lot to prove”


'In The Flesh' is out now Bandcamp for pay-what-you-want alongside an accompanying t-shirt.

LISTEN / BUY IN THE FLESH NOW 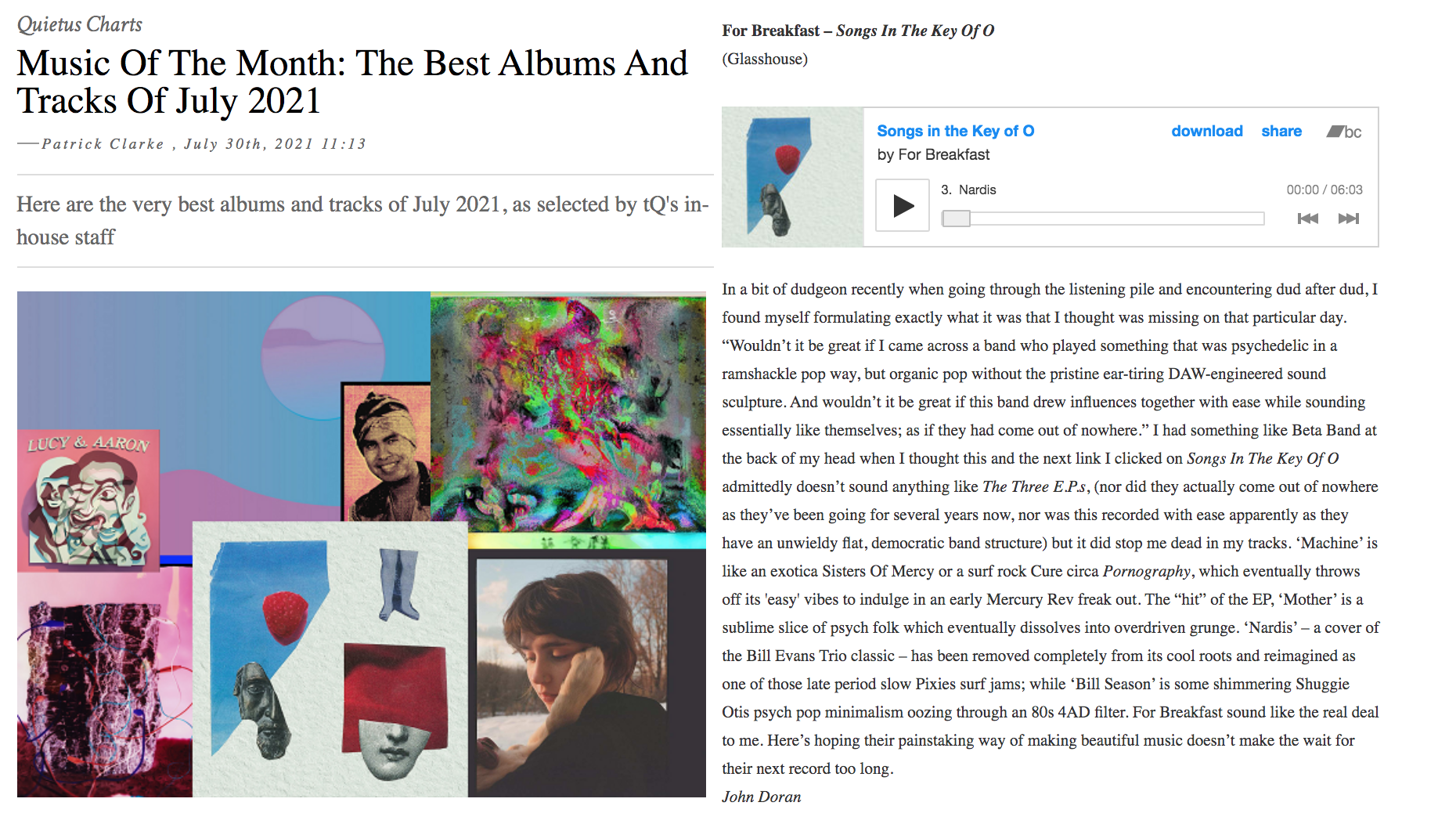 For Breakfast's EP 'Songs In The Key of O' have been included in The Quietus' 'Music Of The Month: The Best Albums And Tracks Of July 2021'.

"For Breakfast sound like the real deal to me. Here’s hoping their painstaking way of making beautiful music doesn’t make the wait for their next record too long." 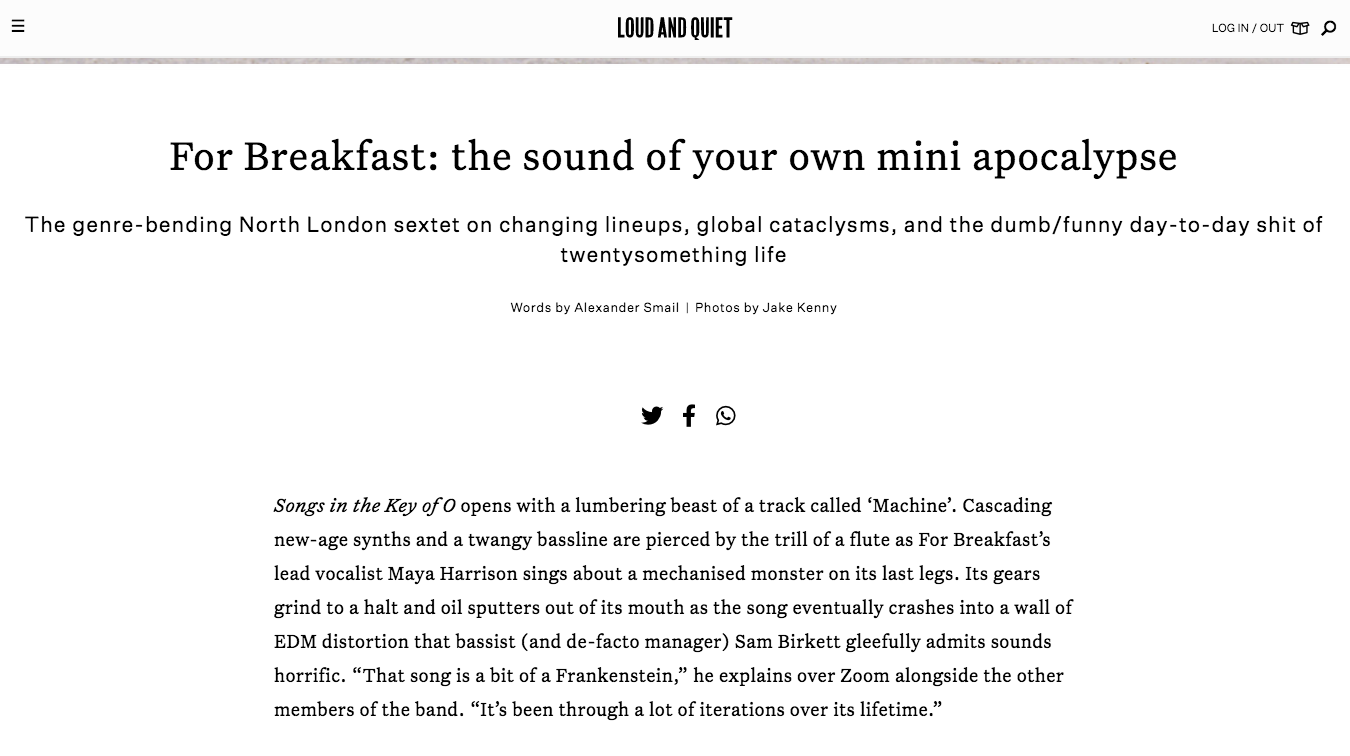 It's now been just over one year since we released For Breakfast's killer debut EP 'Songs In The Key of O'!

For those who missed the print version, the band recently spoke with Loud and Quiet Magazine for an in-depth interview and photoshoot.

"For Breakfast is now a self-sustaining machine; one that can survive the comings and goings of a bunch of 20-somethings. Depending on who is part of the group at any given time, it adapts, morphs and evolves into something unrecognisable from what came before." 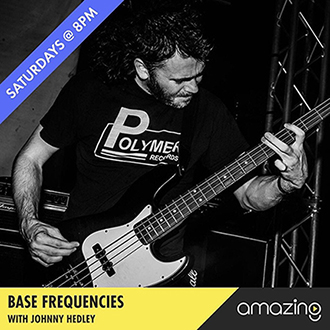 BELK have occupied the airwaves on Amazing Radio via the 'Base Frequencies' show, hosted by Pigsx7's bass virtuoso Johnny Hedley.

You can listen to Johnny spin'Chat Pile' & 'Japanese Dancer', plus a selection of 26 other handpicked slammers via this link. 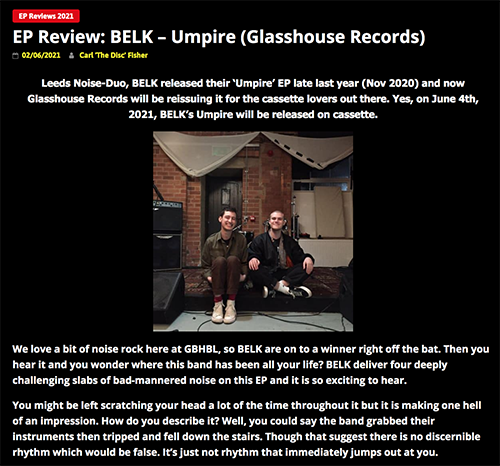 Big thanks to Games, Brrraaains & A Head-Banging Life (GBHBL) for giving BELK - UMPIRE a whopping 8/10 and a brilliant review to accompany.

"We love a bit of noise rock here at GBHBL, so BELK are on to a winner right off the bat. Then you hear it and you wonder where this band has been all your life? BELK deliver four deeply challenging slabs of bad-mannered noise on this EP and it is so exciting to hear." 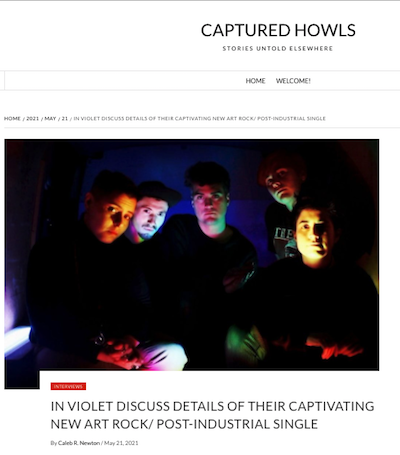 in violet's Jake Murray recently spoke with Caleb R. Newton from Captured Howls about their comeback with their recent single 'Cathedral Thinking', creative sparks during the pandemic and the future direction for the band. Thanks for the interview Caleb!

Burden Limbs have announced their first live appearance of the year at The Lexington, London on Wednesday 26th May.

This will be a socially distanced seated show and the ticket price admits two people.

Tickets are available now through Dice. 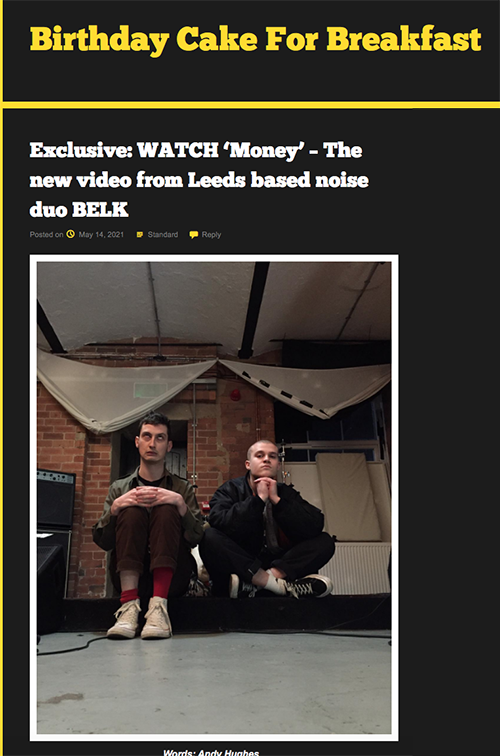 Thank you so much to Andy Hughes at Birthday Cake For Breakfast for premiering BELK's brand new music video 'Money', taken from their 'UMPIRE' EP, released on 4th June.

"Leeds based noise outfit BELK create that sort of joyous, raucous noise you get when there’s just two bods involved."


WATCH THE VIDEO VIA BIRTHDAY CAKE FOR BREAKFAST HERE

After announcing our the most recent addition to the Glasshouse roster a few months back, it's finally come around to announce that the re-issue pre-orders of BELK - 'UMPIRE' is now live on our Bandcamp.

"UMPIRE is a hefty 4-track EP clocking in at just over 11 minutes, vicious, upfront and straight to the point, re-issued for the first time on limited edition two colour cassette tapes accompanied by a limited run of t-shirts designed by guitarist Alex F Pearson. This EP super heavy, abrasive and savage racket which needs to be listened to at maximum volume and is guaranteed to jump right out the speakers." 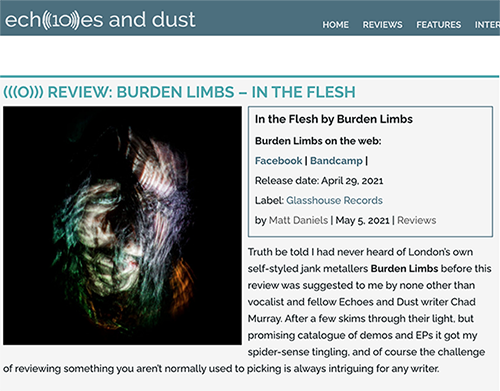 A lovely surprise earlier today to see that Matt Daniels from Echoes and Dust has written this lovely review on Burden Limbs - In The Flesh.

"In the Flesh is an audacious move from a band who have yet to release a full-length album and who are still establishing themselves in this genre… a move that actually pays off in spades as this duo of audial and visual treats packs a punch and showcases a band at the top of their creative game." 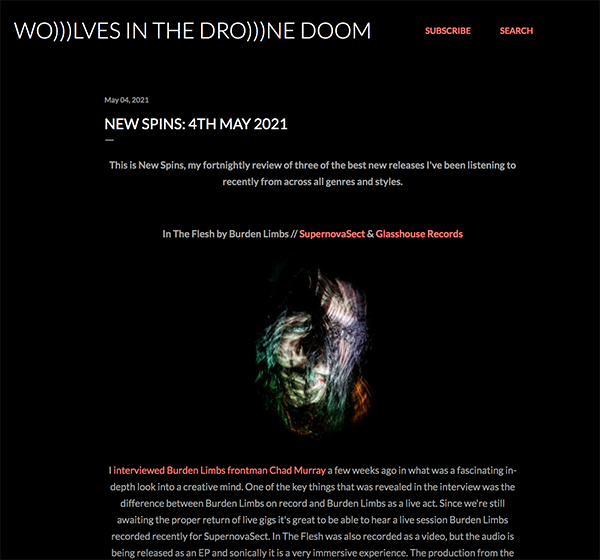 Will from Wolves In The Drone Doom reviewed Burden Limbs - In The Flesh on their 'New Spins' review today. A wonderful review and thank you WITDD for your continued support!

"Definitely one of the best live sessions I've heard during this period, and if the lo-fi nature of some of Burden Limbs recorded material doesn't quite grab you, then give In The Flesh a spin and hopefully you'll be hooked."